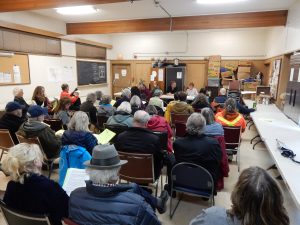 City Council voted 6-3 against the bylaw to amend the Official Community Plan (as requested by the Molnar Group and recommended by city planning staff) at the Public Hearing on October 9, 2019.

The staff report presented for Council’s consideration, “an Official Community Plan (OCP) amendment application to amend the land-use designation within the OCP from Neighbourhood to Corridor, to amend the text of the Old City Neighbourhood Concept Plan, and to concurrently present for Council’s consideration a “City of Nanaimo Zoning Bylaw 2011 No. 4500” amendment application to rezone the subject property from Community Service One to Comprehensive Development Eleven to develop a 175-unit multi-family development.”

Round one of the public hearing to determine the fate of the 388 Machleary Street development site adjourned at 11 pm on Thursday, September 19. The Public Hearing will resume at 7 pm on Wednesday, October 9 at the Shaw Auditorium in the Conference Centre downtown.

You still have an opportunity to make your voice heard!  Any member of the public can speak at a public hearing or send in a written submission. Let’s add to the 43 written submissions received by council as of September 19th!  And let’s add to the many,many folks who addressed council on September 19th. The more old city residents the better.  Learn more about public hearings by reading the city’s Public Hearing Information Sheet.

You can provide a written submission by any of the following methods:
IN PERSON: Drop off at the reception desk at the City of Nanaimo Service and Resource Centre, located at 411 Dunsmuir Street.
POSTAL MAIL: Mail to the City of Nanaimo, Community Safety & Development Division, 455 Wallace Street, Nanaimo, BC, V9R 5J6.
EMAIL: Email should be sent to public.hearing@nanaimo.ca
WEBSITE: Submit comments directly through the City’s website at www.nanaimo.ca/publichearing
Please note that written submissions will form part of the permanent public hearing record.

It’s not over!  It is now more important than ever for you, as a resident in our neighbourhood, to make your views known to City Council.  Thursday September 19 @ 7 pm is the date of the public hearing to determine the fate of the 388 Machleary Street development site.
Click on the green sentence below to:
See what the proposed development looks like in the neighbourhood.
NOCA has done its best to represent the views of residents who participated in our community meetings in 2017, 2018 and our survey in March/April 2019.  Your input has informed our position.  NOCA opposes the precedent-setting changes required in Nanaimo’s community and neighbourhood plans and zoning bylaw to enable the Molnar Group’s proposed 175 unit development (in three 4 – 5 storey apartment-style buildings and 15 town homes) to proceed.  NOCA’s position is:

See what the proposed development looks like in the neighbourhood.

What do YOU want to say to Mayor and Council? You have your chance at the Public Hearing on September 19.  Make your voice heard!

At the August 26, 2019 meeting of Nanaimo City Council, the Molnar Group’s application to amend the Official Community Plan and rezoning application for 388 Machleary Street (the former site of Malaspina Gardens/the old Nanaimo Hospital), to allow the development of a 175-unit multi-family development, passed two readings. The City reports that a third reading will be considered once a road dedication, community contribution, site improvements and public rights-of-way have been secured.

Learn more about the staff report voted on by Council here.

Stay tuned to this website for any updates between now and September 19.

The Nanaimo Old City Association has been informed by the City of Nanaimo that the Molnar Group’s application to amend the Official Community Plan for the property located at 388 Machleary Street (the former site of Malaspina Gardens/the old Nanaimo Hospital) will be before City Council on Monday, August 26 at 7 pm. Council will vote on a staff report and bylaw.

NOCA needs YOUR support at the City Council meeting. Please mark your calendars and plan to attend. NOCA will apply to be a delegation at the meeting. We will have five minutes to speak to the agenda item. The City Council agenda will be online on August 22nd at https://www.nanaimo.ca/your-government/city-council/council-meetings/meeting-documents-and-videos

City Council will vote either for or against the staff recommendation. If Council votes “yes”, the next step is a Public Hearing which will likely be held on September 19, 2019. If Council votes “no”, the Molnar Group has the option to bring back the same proposal within six months from the date of the “no” vote. The developer also has the option of making a new application to amend the Official Community Plan with a new proposal.